Harry Tenafly meets Jim Rockford.
It never happened, but what if it did? 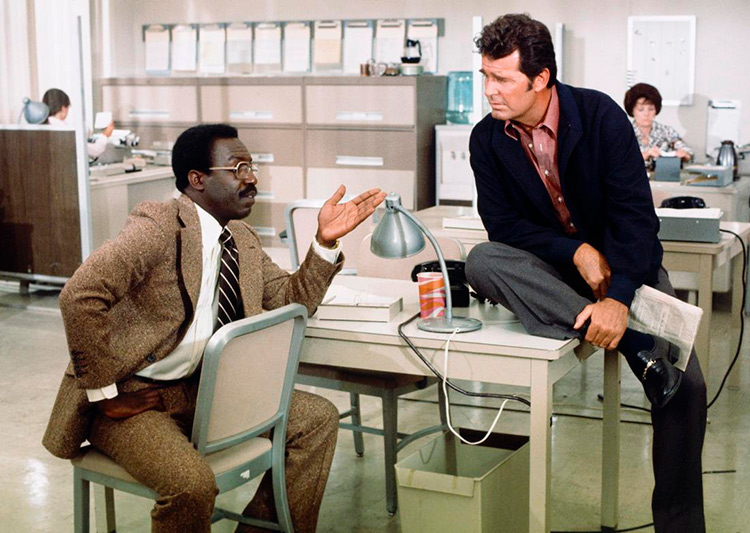 James McEachin starred as Los Angeles area private eye Harry Tenafly in the short-lived NBC Mystery Movie offering Tenafly in 1973-74.  As a P.I., Harry was everything the television private eye of the era definitely wasn’t: a happily married, middle-class family man, with absolutely no interest in violence, beautiful women or baffling crimes.

Meanwhile, on the same network, James Garner was riding high as Malibu private eye Jim Rockford on The Rockford Files, the acclaimed, Emmy-winning series featuring possibly the most beloved detective in television history. As portrayed by Garner, Jim was nobody’s idea of the ideal private eye–at least at first. He was cowardly, and frequently less than confident; a scam artist and trickster ex-con who kept his gun in a cookie jar, and lived in a battered trailer on the beach.

I think Harry and Jim would have understood each other. Because, at their core, they were both decent, and even honorable men, doing the right thing as they saw it, even when it hurt. and they both lived in the Los Abeles area.

The two fictitious characters never met. The closest they got was the 1974 episode of The Rockford Files entitled “This Case is Closed,” which aired on October 18, 1974 (less than a year since Tenafly had been cancelled), from which the still above was taken. In the episode, McEachin plays FBI agent David Shore, who’s in charge of a federal witness who’s just been murdered. The main suspect? Rockford’s client.

But oh, if Harry and Jim had actually met! Think of it–maybe a subsequent Rockford episode, a “very special” one written by Tenafly’s creators, Richard Levinson and William Link, teaming up with Rockford’s creators, Roy Huggins and Stephen J. Cannell.

I can almost see it–Harry doggedly working on a case, worried about some domestic crisis back home, and somehow running into Jim, who’s working on the same case from a different angle, and decide to join forces. Harry won’t admit it, but he envies Jim’s “freedom,” although he’s not initially impressed with Jim’s professionalism. Jim, meanwhile, is frustraterd by Harry’s insistence on playing by the rules.

Soon enough, however, they realize the partnership is working (possibly as depicted in the photo above). Meanwhile, Rocky, impressed by his son’s “new friend,” begins to urge Jim to be “more like your new friend, Harry. He’s responsible and settled down.”

Anyway, when I saw the photo, I just had to share…