“Ray was of the opinion that running a bar and chasing bikinis was not a career. I disagreed.”
— Deep Six 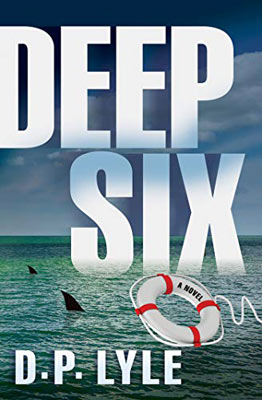 I dunno. There’s so much about JAKE LONGLY that seems, well, calculated. As though the author, D.P. Lyle, was working his way down a checklist of 1980s television P.I. tropes or something.

Hangs out at a cool bar? How about Captain Rocky’s Surf and Turf on the beach in Gulf Shores, Alabama?

Which he also owns? Double check.

Colourful past? How about  a major-league pitcher for the Texas Rangers? Check.

Crazy (but sexy) ex-wife? That would be Tammy. Check.

Hot-and-randy steady? That would be Nicole Jamison, his “latest girlfriend,” a woman whom no man can seem to resist.

And yet… there are a few twists. Initially, at least, Jake’s not really the P.I. — his dad, Ray Longly, is.

Ray’s a piece of work, fifty-eight and still aggressively fit, having worked over his long and sometimes classified career for the CIA, Special Forces, FBI  and Lord knows who else? He’s one abrasive, demanding hard-as-nails son of a bitch, who seems to live on conflict and Mountain Dew, and doesn’t seem to mind pissing off anyone — even the local police. “Screw ’em,” he says, “If they did a better job, I wouldn’t be needed.”

Ray apparently brought the same charming attitude to raising his son, which may be why Jake is so reluctant to get involved in Ray’s life, and prefers to hang out at Captain Rocky’s and ogling all the beach babes, like a frat boy on vacation, cashing in on his status as a former professional athlete. Their relationship isn’t so much Jim and Rocky, as Magnum and Higgins. And yet, somehow, Jake always seems to get drawn into Ray’s work, for one reason or another.

Mind you, network television in the eighties would never have featured as much sex as Jake and the uninhibited Nicole seem to have.

Which may be the point of the whole series. Not the sex, per se, but the rat-a-tat-tat pacing, as the books jump from scene to scene, with the POVs jumping in and out of Jake’s woozy, first person narration (Have they considered Tom Selleck for the audiobooks?). The mysteries aren’t terribly complex, the villains are suitably evil, if slightly predictable (Ooh! A serial killer!), and the writing’s breezy enough to keep the pages turning and the plot churning. Just sit back and enjoy it.

There are worse crimes.

Then again, what do I know? The author is an award-winning, best-selling author of both fiction and non-fiction, and regularly receives blurbs from some pretty big guns in the genre. A forensics expert, he’s served as a consultant to numerous fellow novelists and screenwriters of popular TV shows, and runs ITW’s Online Thriller School. He also co-hosted (with Jan Burke) Crime and Science Radio, and currently hosts the Criminal Mischief podcast series. He lives in Orange County, California. Recently, he’s started another P.I. series, featuring Bobby Cain and Harper McCoy.