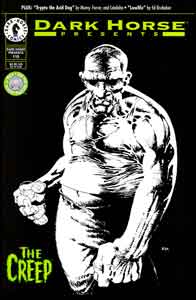 Dark Horse Presents made its debut in 1986 as a monthly comic book showcase/anthology for writers and artists for the then-upstart Dark Horse Comics. It was actually the first comic book they published, and served as their flagship title until it ended its initial run in September 2000.

In July 2007, Dark Horse brought the series back, at least online, on MySpace, and it lasted until August 2010. In April 2011, they brought it back in print, and welcomed back John Arcudi’s The Creep.

OTHER PRIVATE EYES FROM DARK HORSE

Respectfully compiled by Kevin Burton Smith. Any additions would be greatly appreciated.