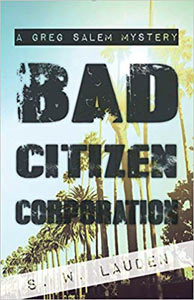 GREG SALEM is pushing forty, but he figures he got it all sussed: he’ll roll East Los Angeles by day for the LAPD, and rock the town as “Fred Despair,” singing for legendary hardcore punk band, Bad Citizen Corporation, by night.

But that all hit a huge brick wall when a buddy gets murdered, and he comes to a professional crossroads. Sprung from the blue brotherhood, he has to rely on his junkie drummer Marco to help him catch the killer in Bad Citizen Corporation (2015). Over the course of the book, the unlikely detectives have to contend with vicious beatings, car chases, women, kidnappers and all sorts of doublecrosses.

Bad Citizen Corporation‘s sequel, Grizzly Season (2016), finds Greg and Marco laying low in a cabin deep in the arse end of the Angeles National Forest, where they run afoulof a local drug gang when they stumble across their marijuana grow.

More of a shit magnet than an actual private eye, Greg’s just too good at the shamus game to easily dismiss him as an amateur sleuth… anyway, that’s my story and I’m sticking to it.

And I should point out that by the third book in the series, Greg and Marco are both more-or-less clean, and operating as Salem & Associates, taking on actual detective work, and occasionally still touring (and maybe recording) as BCC.

S.W. (Steve) Lauden is the Anthony Award-nominated author of the Tommy & Shayna novellas, as well as numerous short stories. He is also the co-host of the Writer Types crime and mystery podcast, and co-hosts Los Angeles’ regular Noir at the Bar.