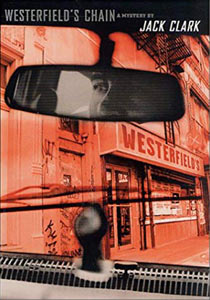 In Westerfield’s Chain (2002), an impressive (and Shamus-nominated debut), NICK ACROPOLIS is an former Chicago Homicide cop now working as private eye, taking on low-level insurance cases. Nothing special, nothing too dangerous. But looking into a routine traffic incident involving an off-duty cop, Nick stumbles upon more than he bargained for, including a giant insurance scam that involves a drug store chain (hence the title), medical malpractice, welfare fraud, corruption in high places, crooked cops, several missing persons and that old stand-by: murder.

Nick’s an appealling character, a jaded, disenchanted cop who left the force under a cloud, and doesn’t particularly enjoy his new career, looking into a seemingly endless string of boring fender benders. But happy camper or not, he is shrewd investigator, stubborn enough to follow a lead, no matter how minor it seems, and tough enough not to back down.

Even better is Clark’s clean, straight-on prose style, his strong evocation of some of Chicago’s less-than-tony neighbourhoods, and his deft hand at characterization — even minor characters come vividly to life. A series to watch.