“His body looked like it had been fed through a sausage press.” 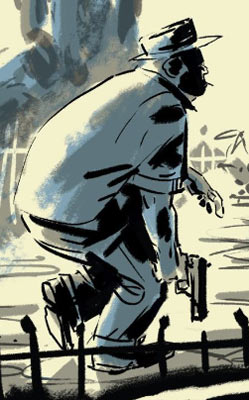 When a man’s partner is killed, you’re supposed to do something about it.

So when Los Angeles private dick PAUL DeSANTO discovers one of his operatives, Lou “Potbelly” Sanders, dead in a Hollywood alley, he figures he better step up to the plate.

DeSanto is relatively successful, a bottom feeder making his bread and butter nailing adulterers, even if he isn’t that fond of the actual work. That’s why he farms the actual peeping out to ops like Lou, an ex-cop “too old for security work, living off a measly police pension.” It’s just another case, another easy score for Paul. Until Lou, hired to tail the wife of a big shot director, gets all excited and calls Paul to meet him right away in an alley “at Franklin, right down the block from Sunset.” Lou promises Paul he’s got something “too hot to handle.”

But when Paul gets there, Lou’s dead. But not just your usual dead…

That’s the premise of “Meatbag,” a gory little two-part standalone gem serialized in Image Comic’s Creator-Owned Heroes, a short-lived anthology series, started by Jimmy Palmiotti and Niles that featured stories by and interviews and articles about indie comic book artists and writers.

But even then, “Meatbag” isn’t really a traditional comic story — there are no talk balloons or panels. It’s essentially a short story by Niles illustrated and hand-lettered by Morse.

But what a story! Niles manages to nail all the good private eye stuff, and brings it all home with a nasty twist, while Morse’s shadowy, impressionistic artwork just flows, panel-free, images tumbling and melting into each other. His portrayal of DeSanto is perfect: a short, overweight hump, sporting a crooked porkpie hat and a short-sleeved shirt that stretches over his bulk like a cheap tent, may be worth the price of admission alone.

The story was originally slated for Niles and Morse’s proposed monthly comic book series from 2012, Crime and Terror, which unfortunately never got off the ground. Which is too bad — judging from what we’ve seen, and the reputations of comic book scribe Niles (30 Days of Night, Criminal Macabre, etc.) and Pixar artist Morse, it coulda been a real  contender.