“I promised I’d show up with a haircut, a new hat, and a pressed suit… but I lie a lot.”
— Carl Kolchak 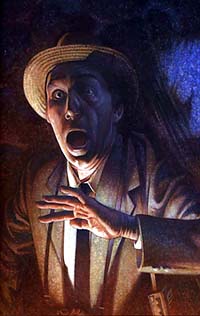 Poor CARL KOLCHAK. A wise-cracking, would-be hard-bitten newsman in a battered seersucker suit and straw boater hat, Kolchak would have been right at home in a 1940’s newspaper flick. There, he could have uncovered a juicy corruption scandal at city hall and gotten the goods on the local underworld boss, all while making time with the flirty, sharp-as-a-tack secretary at the editor’s desk. But it seems Kolchak took a wrong turn somewhere and ended up in a couple of 1970’s TV movies (and a subsequent short-lived TV show) in which he kept stumbling across increasingly outrageous news stories that not only put his life in imminent danger, but inevitably involved horrific — and unbelievable — supernatural or paranormal beings like vampires, werewolves and aliens.

In fact, Carl seems to spend most of his time either being scared out of his tennis shoes by exceedingly lethal monsters, or (because the proof of his wild stories always seems to get lost, destroyed or covered up) as being regarded as certifiably nuts by his long-suffering editor Tony Vincenzo. Still, in the tradition of the best pulp heroes, Carl Kolchak never lets his outward cynicism stop him from battling near-hopeless odds in his quest for truth — nor would he ever let the forces of supernatural evil prey on the innocent (even if in destroying said evils, the luckless Kolchak also often ends up destroying the only proof he has of their existence.) All in all, this is pretty heroic behaviour for a guy who looks as if he hasn’t bought any new clothing in at least 30 years.

Carl’s roots were in an unpublished novel by Jeff Rice called The Kolchak Papers, written around 1970. It bounced around Hollywood until someone saw some TV potential in the unpublished story about a fast-talking news hawk trying to track down a modern-day vampire, and it was adapted into the 1972 TV movie The Night Stalker by horror writer Richard Matheson (The Twilight Zone). Then, in two great bits of casting, Darren McGavin (Mickey Spillane’s Mike Hammer, The Outsider) was given the plum role of crusading wisenheimer Kolchak, and Simon Oakland was assigned to play Tony Vincenzo, his short-tempered, incredulous boss (and reluctant friend).

Set in Las Vegas, the resulting TV film turned out to be a near ideal mix of B-movie horror and humour, and at the time of its original airing it became the most highly-rated TV movie of all time, with a 33.2 rating and a 54 share. Highly regarded then, The Night Stalker still holds up today as a superior example of how to do semi-low budget horror the right way; concentrate on the writing and acting, develop some genuinely interesting (and intelligent!) characters, and keep the ‘monster’ in the shadows where it belongs.

Naturally, the success of the initial TV movie inevitably led to a sequel. The Night Strangler (1973) found Kolchak in Seattle, somehow again working for Tony Vincenzo, and stumbling across another weird news story involving people being mysteriously drained of their blood. It’s not quite as good as the original, but it’s still fun, and it features a virtual parade of great character actors in terrific supporting and minor roles.

Then came the TV series, variously known as Kolchak, The Night Stalker or (most often) as Kolchak: The Night Stalker. Debuting on September 13, 1974 (Friday the 13th, natch!) the show now found Carl toiling for the Independent News Service, a low-rent wire service run out of Chicago by — oh, c’mon, guess who? — his old friend and nemesis Tony Vincenzo.

Although inconsistent, the short-lived TV show quickly become a long-time cult favourite, and has frequently been attributed — by his own admission — as the inspiration of Chris Carter’s The X-Files. The parallels are obvious: as with Carter’s show, each week our smart-mouthed, crusading hero gets hold of a seemingly-straightforward, but officially unexplained mystery, a mystery that upon further investigation somehow blossoms into a wild encounter with werewolves, killer robots, vampires, invisible aliens, or other even weirder creatures. And each week, our hero not only has to do battle with these bizarre (and lethal) supernatural entities, he also has to cross swords with skeptical colleagues, disbelieving superiors, and hostile public officials, all trying for one reason or another to stop him from getting at or revealing The Truth. Now if that doesn’t sound like a template for the X-Files’ Fox Mulder, what does? Carter even went so far as to cast McGavin in a recurring role as a retired X-Files veteran with an acerbic personality and a familiar rumpled wardrobe.

Alas, the show only lasted for one season. Some say it was because of mediocre ratings; others claim that Jeff Rice (the original creator of the Kolchak character, remember?) derailed the series when he sued the production company, allegedly because the TV show was done without his permission. Whatever the reason for its demise, though, at its best Kolchak: The Night Stalker was certainly one of the top hard-boiled horror comedies ever made. Carl’s voice-over dialogue (often dictated into his tape recorder as he was making notes for his news stories) was always bluntly cynical, generally funny and occasionally even quasi-poetic; the chemistry between Carl and Tony was invariably fresh, edgy and tension-filled; and there were a plethora of great character roles for actors like Keenan Wynn (two episodes as an antagonistic police captain), John Fiedler (three eps as earnest, freewheeling mortician Gordie The Ghoul), James Gregory, Scatman Crothers, Alice Ghostley, Phil Silvers, Ruth McDevitt (unforgettable as Miss Emily in “Horror in the Heights”), and many others.

(Incidentally, for those who are wondering why this show was generally so well written and cast, maybe it had something to do with it being the first important writer/consultant credit for David Chase, later of The Rockford Files and later still of The Sopranos.)

Overall, even if Kolchak: The Night Stalker has a few really clunky episodes (and, oh my, it does, it does), and even if some people can’t get past the idea that Carl keeps coming across supernatural beings every week for no readily apparent reason (unlike, Angel or Buffy The Vampire Slayer, where the concept of the Hellmouth helped to explain why all those otherworldly beasties kept showing up in Sunnydale), the show ultimately works. It’s partly the acting, it’s partly the writing.  But it’s mostly because the fast-talking, not-entirely-honest, quite-often-a-gigantic-pain-in-the-ass Carl Kolchak — a guy who would be the first to deflect any accusations of heroism with a well-timed sarcastic comment —  really is a genuine ‘reluctant hero’ in the best pulp tradition.

After the show ended, all was quiet in Kolchak-land for a long time. The Night Stalker, The Night Strangler and 16 of the series’ 20 episodes were released into syndication. The remaining four episodes were (rather ineptly) edited into a couple of two-hour ersatz TV movies which are now infrequently seen, and should best be avoided in this butchered state anyway.

Then in 2002, Moonstone Comics began to release a series of Kolchak graphic novels, including one issue that was adapted by Moonstone editor Joe Gentile from a legendary ‘lost’ TV episode script. Eventually, after a series of stand-alone graphic novels and one-shot comic books, they launched a short-lived monthly series. Set in the present day, in these new comics Carl hasn’t aged a bit!  Hmm… maybe Carl Kolchak himself is a vampire?

Nah. No self-respecting 21st century vampire would be caught dead in a seersucker suit, a straw boater hat and tennis shoes. But Moonstone kept on swinging, and continued releasing assorted comics, graphic novels, novels and short story collections, often teaming up Kolchak with various other characters they’ve licensed over the years, including Sherlock Holmes, Honey West and Kevin Anderson’s zombie P.I.  Dan Shamble in a 2016 one-off.

In March 2005,  a revival of the series was announced, with young, hip Stuart Townsend cast as a Mustang-driving Kolchak obsessed with finding his wife’s killer (he had a wife?) and Gabrielle Union as his skeptical colleague Perri Reed. It was simply an X-Files ripoff, with any good will the original Night Stalker series had generated striped for parts. Nonetheless, it was met with a resounding meh.  Only six of its ten episodes were even aired.

Respectfully submitted by Rudyard Kennedy, with additional information Kevin Burton Smith. Kolchak illustration by Doug Klauba, from the Moonstone graphic novel, The Get of Belial.