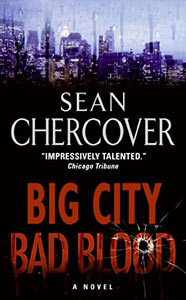 Certainly one of 2007’s most heralded P.I. debuts was Sean Chercover’s Big City, Bad Blood, which introduced RAY DUDGEON, a burnt-out former Chicago reporter turned private eye. But all Ray’s considerable investigative skills don’t help much when he agrees to act as a bodyguard for a scared prosecution witness — a locations manager for a film shooting in Chicago — who saw something the mob would really prefer he hadn’t

Dudgeon only takes the case because he’s been assured by contacts within the mob that they’re not really interested in the guy, but soon enough bodies start to drop, and Dudgeon finds himself waist-deep in a scanadal involving blackmail, hookers and organized crime that may reach as far as Washington.

Dudgeon’s an eye from the old school, a definite and intentional throwback, partial to booze, tobacco and a fair amount of rude wit. The writing is tough and muscular and the big-shouldered, blue-collar prose style recalls nobody so much as Loren Estleman or Rob Kantner.

And he does his homework. The FBI website has (or had — who knows these days?) a page that talks about how they work with writers to achieve “an accurate portrayal of the Bureau.” They name two non-fiction books and one novel: Sean’s Big City, Bad Blood.

Unfortunately for us, Chercover only wrote one more novel and a few short stories featuring Ray, but he continues to storm the citadel, and has won the Anthony, Shamus, CWA Dagger, Dilys, and Crimespree awards, and been shortlisted for the Edgar, Barry, Macavity, Arthur Ellis and ITW Thriller awards. Check him out.

Sean Chercover is a former Toronto private detective turned novelist and screenwriter, and has been a video editor, scuba diver, nightclub magician, encyclopedia salesman, and truck driver. After living in Chicago; New Orleans; and Columbia, South Carolina, Sean has returned to Toronto.