“My name is Kinsey Millhone. I am a private investigator, licensed by the state of California. I am thirty-two years old, twice divorced, no kids. The day before yesterday I killed someone and the fact weighs heavily on my mind.”
— the opening lines of A is for Alibi 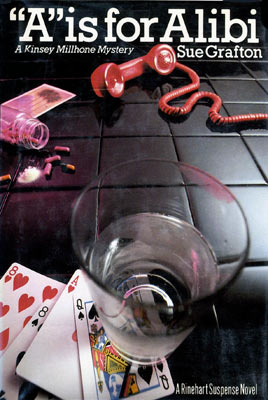 Can you dig the new breed?

Now, of course, female eyes are a dime a dozen, but once upon a time (say, 1982) private eye KINSEY MILLHONE was a spit in the face of the male-dominated Shamus Game.

She was arguably the most popular and best of the female gumshoes to make their big splash in the eighties — or at least one of the top two (a case could certainly be made for Sara Paretsky’s V.I. Warshawski). They may not have been the first, but they were a one-two punch that we’re all still recovering from.

Kinsey’s charm lies in the fact that she’s a woman of “rare spunk and independence,” and that not only does she think she’s tougher and smarter than she is, but that she consistently surprises the reader by being smarter and tougher than we think she is. She’s no white knight, seething at the injustices of the world, but a pragmatic businesswoman whose quixotic streak and personal idiosyncrasies are balanced against her dedication and loyalty to her clients.

Because, at first glance, she’s an accident waiting to happen. She drives a decrepit Volkswagen, she cuts her own hair with toenail scissors, she lives in a garage with a closet full of neuroses and one dress, a remarkable piece of black, synthetic miracle fabric which seems more capable of handling the slings and arrows of outrageous fortune than Kinsey is. Oh, and she’s permanently stuck in the eighties. Although that’s by design — unlike most series detectives, Kinsey’s adventures all take place within a few years of each other.

This is the private eye Annie Hall-era Diane Keaton was born to play.

But it’s not all D is for Dysfunction. When it comes to business, Kinsey’s a true pro. She’s a dogged investigator, tough and smart but never reckless, not afraid to knock on doors and do the legwork. And refreshingly, she’s not afraid to let us see the business side of her business, be it worrying about paying the office utility bills, collecting from deadbeat clients, or sweating over licensing woes or contract hassles. It adds a a cold dash of pragmatism and versimultude that neatly balances her personal quirks.

An orphan by incident and temperament, she was raised by an elderly aunt who imbued her with a feisty streak of independence and self-sufficiency, which adds to her disdain for family and all its myriad entanglements. Which makes it all the richer as the series progresses, and familes, both personally and professional, insist on working their dark and twisted ways into Kinsey’s life and caseload. That Kinsey’s turf is the sun-blinded streets of southern California’s Santa Teresa (actually Santa Barbara), the same streets Ross Macdonald’s Lew Archer prowled — a man whose own litany of family woes is well known — is perfect.

Incidentally, Kinsey’s creator, Sue Grafton, insists she only writes about crime — she doesn’t commit it. She confesses that she’s a “law-abiding little bun.” And she’s the daughter of C.W. Grafton, whose own The Rat Began to Gnaw the Rope is considered by many to be a classic of crime fiction.