Skip to content
kevinburtonsmith Detective, This Just In September 15, 2018December 29, 2018

“DO YOU EVEN KNOW WHAT’S GOING ON, YOU STUPID FUCKING ASSHOLES? DID YOU FUCKERS EVEN VOTE?”
— Phoebe in The Feral Detective 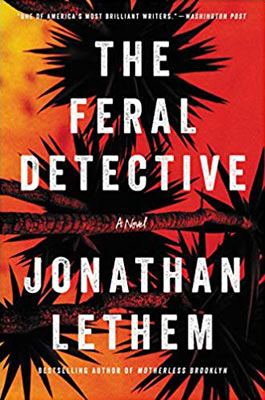 Other dicks keep a bottle in the desk drawer. CHARLES HEIST keeps a possum named Jean.

No stranger to the P.I. genre at this point, Jonathan Lethem has already wandered into ShamusLand before, most notably with the National Book Critics Circle Award-winning Motherless Brooklyn.

Now Lethem is back with the genre stir fry of The Feral Detective (2018), featuring yet another oddball eye. Charles is the fifty-something “feral detective” of the title — a hairy, cowboyish off-the-gridder who wasn’t raised by wolves, but comes close. He lives with three dogs (Jessie, Miller and Vacuum) and the afore-mentioned possum, works out of a shabby office out in front of the trailer park in which he keeps his rundown Airstream in Upland, California and seems to operate by a whole set of not easily defined social skills. He agrees (reluctantly) to help snappy, snarky former New York Times reporter Phoebe Siegler find Arabella, a friend’s runaway teenage daughter. After a brief sojourn up Mount Baldy, Arabella (who may have been using Phoebe’s name) has disappeared into the Mojave Desert, where she’s apparently hanging out with the Rabbits, a mostly female cult involved in some sort of perpetual tribal conflict with the mostly male Bear clan. But both the Rabbits and the Bears seem to share some sort of secret history with Charles, much to Phoebe’s dismay.

It’s a wild, picaresque tale, sociological spelunking of the finest kind, with a plot that zigs and zags along, boasting a lot of talky talk (the high-strung Phoebe serves as the neurotic narrator), while playing host to a slew of eccentric characters bouncing around California’s High Desert (Eccentric characters bouncing around California’s High Desert? Who knew?) and a lot of moaning and groaning about the election of Donald Trump, plus a dash of grief about the death of Leonard Cohen.

Meanwhile, Manhattanite Phoebe herself is lost, worlds away from her liberal comfort zone, trying to come to terms with the “barking madness” of a post-election world that gave us President Donald Trump, and her growing sexual obsession with Heist. “I wished for Heist to uncrimp my foil,” she confesses at one point. Oy!

It was also an intoxicating release (at least for me), something like an acid flashback of suppressed pop culture memories, dredging up everything from Edgar Rice Burroughs’ Tarzan, Golding’s Lord of the Flies and Ross MacDonald Lew Archer novels, to Jean Craighead George’s My Side of the Mountain, the Mad Max movies, and several of Margaret Atwood’s books. Your mileage may vary.

And when was the last time you read a PI novel narrated by the client?

STRAIGHT FROM THE AUTHOR’S MOUTH