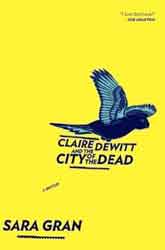 Uh-oh. We’re not in Chandlertown anymore.

But we certainly passed through there on our way here. Anyone expecting author Sara Gunn to simply milk the noir vein she tapped so well in her classic Dope has another think coming.

Imagine the squeaky clean Nancy Drew all grown up and adult and totally alive, complete with raging hormones and all sorts of nasty habits, turned professional investigator — and relying on a lot more than good girl pluck, kiddie pulp coincidence, a wealthy daddy and her Wonder Bread chums to crack a case.

Claire does occasionally rely on assistance from her two best friends from childhood, Tracy and Kelly, but she’s just as likely to use dreams, omens, her troubled past, I-Ching readings, assorted substances (controlled and otherwise) and the teachings of a legendary book, Detecion, written by enigmatic French detective/philosopher, Jacques Silete, to get the job done.

And it’s that anything-and-everything approach, the woozy literary equivalent of a mid-sixties-era Bob Dylan song, that makes this book such a hoot. Something may be happening here, but you won’t know what it is…

… and those handle-stealing vandals just aren’t any help.

You want another pop/rock reference? Claire displays a “What is it? I’ll take it” view of drugs similar to Dr. Jimmy in The Who’s Quadrophenia.

Dogged and determined (and frequently stoned), Claire will use whatever it takes — even a few metafiction asides — when she’s hired by his nephew to locate straight arrow New Orleans Assistant District Attorney Vic Willing, who hasn’t been seen since Katrina, in Claire DeWitt and the City of the Dead (2011). It’s a metaphysical, philosophical headspinner of a detective novel that had no damn business being so much fun.

Or being spun into an apparent series, a high wire act if there ever was one, given the appearance in 2013 of Claire DeWitt and the Bohemian Highway, and The Infinite Blacktop in 2018.

Now put that in your pipe and smoke it…

The author, according to one web site, is “a veteran… of the New York City punk-into-hipster scene, with late nights seeing 5 bands at crappy clubs and cruising the city for the perfect record, jacket, or tattoo.” Having met here, all I can say is she’s a cool chick.”