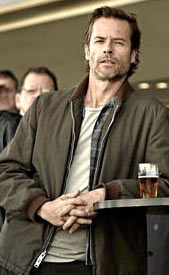 Got a cryptic note in my in-box. It said: “JACK IRISH — Aussie ex-soldier, ex-lawyer, ex-alcoholic, punter, footy fan, cabinet-maker and finder of people and conspiracies.”

Well it certainly piqued my interest, so I did a little digging. Turns out Jack’s a character created by some guy called Peter Temple. And to Jack’s already impressive resumé, you could add cook, part-time debt collector and sometime private eye.

Jack was a Melbourne shyster, working criminal cases, but pretty much dropped out of everything when his wife was killed by a deranged client. When he finally crawled out of his prolonged binge of grief, self-pity and booze to rebuild his life, he sought solace in manual work, attaching himself to Charlie Taub, an crochety old furniture-maker who lives in Fitzroy, a Melbourne suburb.

But now he’s more-or-less human again, and has set up a non-criminal practice in Fitzroy. He often finds himself employed to find people who don’t necessarily want to be found — something for which he seems to have a knack. But he’ll take on almost anything, even debt collecting. As a detective, he’s got a keen eye and a dry wit, and he tends to play the odds, cutting a corner now and then if he thinks he can get away with it. Just like his preference in football, this lad prefers “Australian rules.”

When he’s not poking a stick into various nasty messes and (usually) getting in way over his head, he splits his time between the pub, the horse racing, football and — oh, yes — cabinetmaking.

An excellent, well-written series that balances heart and heat in equal measures. Of course, that meant for years you couldn’t easily find any of them in North America, or at least anywhere I looked.

Fortunately, the 2013 DVD release of Jack Irish: Set One, featuring two made-for-Australian-television movies starring Guy Pearce, seems to have rekindled interest in the series, and all four books in the series were re-released. Even better, though, is that the two films spawned a third, and that subsequently begat a series in 2016, again starring Pearce.

Arguably the most successful Australian crime writer of recent years, South African-born Peter Temple was best known for his Jack Irish books. He won Australia’s Ned Kelly Award for Best Crime Novel three times — more than any other writer. A former journalist, editor and lecturer, he decided to become a full-time freelance writer in 1995. He published his first novel, Bad Debts, which introduced Jack Irish, in 1996, and promptly won the Ned Kelly Award for Best First Crime Novel). He’s so far won four more (a record!), for Dead Point (2000) and White Dog (2003), both Jack Irish books, and one each for standalones Shooting Star and The Broken Shore, which also won the Crime Writers’ Association Gold Dagger in 2007, making Temple the first Australian to win a Gold Dagger.

Respectfully submitted by Kevin Burton Smith, following a lead from Inkerman Hotel, whoever you are. Thanks, mate.