This site is, officially, for “private eyes, and other tough guys and gals who make trouble their business — not their hobby.”

But I’ve given myself enough leeway to include some journalists, lawyers, professional criminals, bodyguards, insurance investigators and the like.

Still, I’m not a complete Nazi — I’ve stretched that already loosey-goosey definition even further for my Word on the Street listings, where I try to include new (or new-ish) crime fiction items I hope will be of interest to followers of this site. Someone who loves Chandler might get a kick out of, say, Michael Connelly.

Yeah, yeah, yeah, I can hear you muttering, but “What is a private eye, then?”

Here are a couple of pretty good definitions you can pretty much take to the bank:

Simple enough, right? But if you want to split hairs…

The English scholar and noted expert on crime fiction, in his excellent Murder Will Out: The Detective in Fiction (1989), suggested that the Private Eye was radically different from the Private Detective. Under the title “The Schism of the 1920s“, he goes on to explain:

“Early in the 1920’s a new type of fictional detective came into being in the United States. Whereas the conventional private detective always has literary precedents, going back to Sherlock Holmes, and through him, to Dupin, even if the connection is attenuated at times, the new type, variously called private investigator, private eye, or… hard-boiled dick, is the product of American reality. Sometimes he belongs to a detective agency… sometimes he is a lone individual, a modern knight, defending the hapless and oppressed. But in both cases the gangsters, the violence and the “gun-play reflect… American life during and after Prohibition.

“Though similiar superficially, the private detective and the private eye are radically opposed to one another…

Binyon then goes on to illustrate his point with the following table: 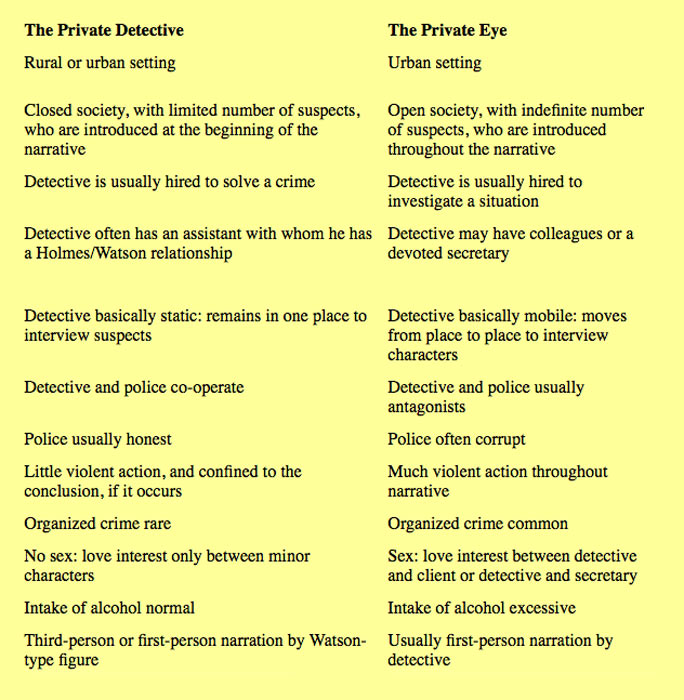 Okay, that last bit’s hokum. Even in 1989, much of Binyon’s thesis seems woefully out of date, such as his suggestion that the genre doesn’t travel well outside the U.S. (!), or that the private eye story must take place in an urban setting. By 1989, there was plenty of evidence to the contrary. Yet much of the rest of his bold attempt seems dead on the mark.

If you read P.I. fiction, eventually you’ll have to deal with Bob. He not just writes the stuff — he lives and breathes it. He founded the Private Eye Writers of America and knows exactly how many P.I. beans make five (well, most of the time). In 1986,  he wrote a guest editorial for the May issue of Alfred Hitchcock’s Mystery Magazine, in which he took a whack at it also, adding a little historical perspective along the way, and dropping a few names…

“The … private eye story has been called the only true native American literary form. In the opinion of some of its practitioners–most notably Loren D. Estleman and Robert B. Parker–the P.I. story is linked with the western story, the one that has the loner riding into town to take on the bad guys single-handedly. If that is indeed the case, then Shane is just as much a private eye novel as Red Harvest.

What does make a private eye novel, then? Is it the fact that the main character has a private detective’s license? Or does it have more to do with a prevailing mood or atmosphere that permeates the story?

…I think that any given writer, at any given time, knows if he is writing a private eye novel–or short story–or not…

All of these characters operate under the same general moral code, which is of course a large part–if not the largest part–of the P.I. ambience. The code says, “The guilty must be punished, and I’m gonna .punish them!” Now, each man has his own way of upholding the code, but when you think about it, there’s not much difference between the way Mike Hammer does it and the way Travis McGee does it and the way Matt Scudder, Nameless, and Sharon McCone do it.

They do it alone!

Webster says that “atmosphere is a dominant effect.” Well, the dominant effect in the P.I. novel is the P.I. himself. Along with the “code”, the P.I. ambience is supplied by the man–or woman. Most successful P.I. novels are–to a large extent–character studies of the P.I. and his world. What makes Scudder or Jake Asch or Amos Walker tick is just as important–if not more important–to the story as the plot.

So, what makes a P.I. story or, better yet, a P.I. “world”? It is solitary, often lonely, very often dangerous–physically and emotionally; it is the film noir…of the literary world because the reader is drawn into it, takes every step and every physical knock or emotional jolt that the P.I. takes.

Under these conditions, Harold Q. Masur’s Scott Jordan is a P.I., Ed McBain’s Matthew Hope is a P.I., Craig Rice’s John J. Malone is a P.I.–all lawyers by trade–and so too are Pete Hamill’s Sam Briscoe, David Alexander’s Bart Hardin, and Marc Olden’s Harker, all newspapermen.

This is, of course, merely one man’s opinion and will probably have no great effect on the outcome of this question–because there is no possible outcome possible. The great debate…will rage on, but as long as the “ragees” and “ragers” keep writing private eye stuff, more power to them.

Indeed. I might add that as long as they keep writing, we’ll keep reading.

A former librarian (it shows) and contributor to this site, Gary worked out an analytical formula for determining what a private eye is, or is not, in his absolutely essential A Reader’s Guide To Private Eye Novels (1993). “This is the edited version from my slide show on the history of the P. I.,” he adds, “but it will suffice to show that it is wide open to interpretation.” 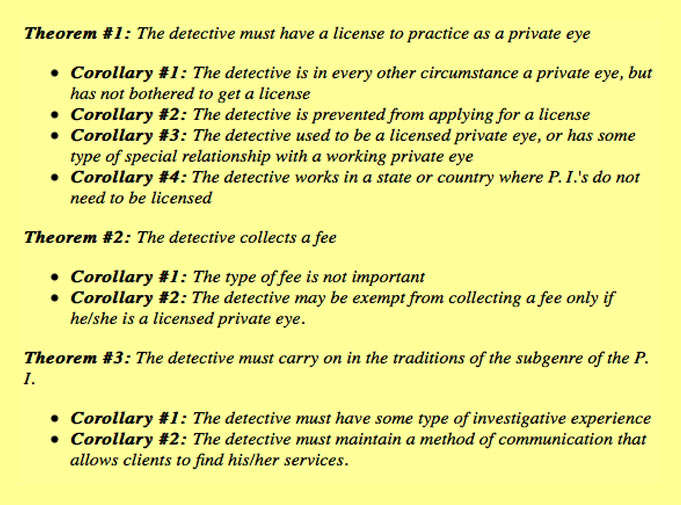 Here’s one more stab, by our old pal Paul, who offered this liberal definition:

I just LOVE these issues which promise spirited debate with little or no hope of consensus. To me, the fictional PI represents less an occupation than a stance — an attitude, if you will. Who is closer to the idea we have of a PI? The licensed but sedentary Nero Wolfe? Or characters (all unlicensed) like Travis McGee, John Deal, Gabriel Du Pre and (the early) Matt Scudder?

Crazy-making, ain’t it? For myself, I look upon any character who is engaged in an investigation for a private party . . . or for private reasons . . .as a PI. The job’s basically the same, anyway, and labels are just a convenience.

Me? Personally, I think both T.J., Bob  and Gary are all pretty close. My personal take is that the private eye story started as an American attempt to update the earlier cowboy mythos, placing them in a contemporary American urban setting. But it’s not that simple. The cowboy mythos is itself merely a frontier update of a much earlier tradition. Grab a piece of chalk, and trace a line backwards from Three Gun Mack to Nick Carter to Sherlock Holmes to Wyatt Earp to Hawkeye in James Fenimore Cooper’s Leatherstocking tales, and then continue to Robin Hood and Ivanhoe and Lancelot and King Arthur et al.

Circle the last name of the author of La Morte d’Arthur, Thomas Mallory, and draw a new line to the name of one of Chandler’s early eyes. Draw another line from Hawkeye and Chingcachook (think of ’em as an early version of Spenser and Hawk) studying some footprints in The Last of the Mohicans to that scene where Holmes explains the significance of footprints to Watson.

But of course borders are tricky, nebulous things, and it didn’t take long for the shamus game to go global. Or viral. Circle the fact that Chandler was educated in England, and that Ross Mcdonald (Kenneth Millar) was half-Canadian, and simple definitions based on national chest-thumping start to seem not so simple. So, what are we left with?

There are always those who will stand for the law, while standing outside of it. and if they can make a little scratch from it, well, why not? A private eye makes trouble his business, not a hobby.

But of course, there’s more to it than that. What sort of person would choose this kind of life?

Well, fortunately, we had someone to map it all out for us. Members of the congregation, please turn to The Gospel According to Brother Ray…

This topic will no doubt go on and on, wandering the oceans of nitpicking, without much chance of hitting any iceberg of conclusion, but, as Paul suggests, that’s what makes it kinda fun. Feel free to send me your comments below.